Use of this site indicates acceptance of the Privacy Policy and Terms of Use.
The information on this Website is not reliable and not intended to provide tax, legal, or investment advice. Nothing contained on the Website shall be considered a recommendation, solicitation, or offer to buy or sell a security to any person in any jurisdiction.
CEO.CA members discuss high-risk penny stocks which can lose their entire value. Only risk what you can afford to lose.
© 2021 - CEO.CA Technologies Ltd.
@thenewswire/mammoth-reports-initial-drill-results-from-its-diamond ↻
0 online
Today This week
Search Subscribe
Members of @thenewswire/mammoth-reports-initial-drill-results-from-its-diamond

by @thenewswire on 18 Nov 2021, 09:45
Mammoth Reports Initial Drill Results from its Diamond Drilling Program at its Tenoriba Gold-Silver Property, Mexico

The drill program is designed to test up to five target zones which measure from hundreds of metres (m) to over one kilometre (km) in strike length along a 4 km, east-west trend of gold-silver mineralization identified in 3-dimensional (3D) modelling incorporating data from over 3,000 soil, chip and channel samples, 26 prior diamond drill holes, geological and structural mapping and the potential continuity at depth of surface mineralization as indicated by an Induced Polarization/Magnetometer (IP/Mag) geophysical survey (please refer to the descriptions of target zones in press releases dated July 22, 2021).

Notes:         Gold Equivalent where silver grade is converted to gold grade at 75 grams per tonne silver = 1 gram per tonne gold.

Thomas Atkins, President and CEO of Mammoth commented on the initial results from the Tenoriba diamond drill program stating: "We’re pleased that we can kick-off our 2021 drill program by reporting multi-tens of metre intervals of potentially economical gold-silver mineralization at Tenoriba. This is especially so within the Carneritos target area, which measures approximately two by one and a half kilometres and yet has only had three prior drill holes testing abundant surface gold-silver mineralization at depth. The grades of the intervals intersected by these drill holes compare favourably to producing mines such as Agnico Eagle’s La India mine in the Sierra Madre, Mexico, the reserve grade of which is 0.66 grams per tonne gold reported in the most recent, 2020 reserve report. La India, as an example is a similar High Sulphidation system to Tenoriba, being mined by open pit with heap leach gold recovery, located in the same Sierra Madre belt as Tenoriba in Sonora State, Mexico.

“Results from this initial series of holes compare favourably to intervals from the prior three holes in the area, expand two zones separated by over 500 metres, but yet to be determined whether connected and assist us in building upon these intersections and further enhancing our understanding of mineralization at Carneritos and throughout the entire 4-kilometre trend of gold-silver mineralization.”

As previously discussed, Mammoth intends to initially drill 2 to 4 holes within each target zone then move to another target zone to drill a similar number of holes (please refer to press release dated July 22, 2021 for target zones). Company geologists will await the results from initial drill holes testing target zones prior to further follow up drilling of these areas. Where mineralized intervals are intersected in the initial sequence of drilling, or where holes fail to encounter mineralization as suggested by the data, follow up drilling will be based on field assessments combined with surface geology, sampling and geophysics data to assist in defining follow up drill collar locations with the aim of assisting in more clearly understanding and testing the controls and continuity to gold-silver mineralization.

The hole was drilled to a depth of 199.5 m of a planned 150 to 200 m depth at 55 degrees decline/dip and was collared approximately 280 m east of historical Mammoth drill hole TEN 17 - 06 and 250 m northeast of hole TEN 17 - 07. This drill hole was collared to test the depth extent of altered and mineralized porphyritic dacite and associated volcanic breccia observed on surface and in 2017 program drill core. Advanced argillic alteration, including silica and patchy vuggy silica together with X-ray diffraction clay analysis showed presence of dickite and pyrophyllite, common alteration clay minerals in High Sulphidation systems, present in both surface and historical drill core near this target. There also appeared the potential of a buried sub-vertical moderately resistive I/P geophysical feature at depth, which may have represented a mineralizing epithermal feeder structure.

The drill hole was successful in intersecting the mineralized porphyritic dacite and associated breccia along 136 m core length of which the first 27 m are strongly oxidized. This unit hosts a mineralized zone from 7.5 to 45 m for a 37.5 m interval averaging 0.31 grams per tonne (g/t) gold and 17.1 g/t silver for 0.53 g/t gold equivalent (Eq), including a 4.5 m interval grading 1.47 g/t gold Eq. This drill hole potentially extended the strike length of the mineralized feature intersected in hole TEN 17 - 06 and TEN 17 - 07 by up to 250 m to the east.

The hole drilled to a depth of 88.5 m of a planned 50 to 100 m depth, at 60 degrees decline/dip and was collared approximately 63 m southeast of hole TEN 17 - 06 and 120 m northwest of hole TEN 17 - 07 (refer to description Drill Hole TEN 21 - 01 above for historic drill hole intervals and assay results). The hole was collared approximately mid point between holes TEN 17 - 06 and TEN 17 - 07. Please refer to Figure 1 and Figure 2 for drill hole locations. The control to mineralization present in these two holes was interpreted to be related by a west - northwest, near vertical structure (suggested in part by 2014 geophysics survey) or to be strata-bound with a shallow south to southeast dip, consistent with the general strike and dip of the volcanic stratigraphy on the property.

After collaring in weathered, clay rich and oxidized porphyritic dacite down to 21.2 m and mixed oxide – sulfide down to 26.9 m, the hole remained in fresh unaltered dacite porphyry to the end of the hole at 88.5 m and did not intercept the interpreted possible sub-vertical or strata bound mineralization control linking the mineralized intercepts of holes TEN 17 - 06 and TEN 17 - 07 and it is believed that most likely the hole remained on a faulted block between these two holes.

The hole was drilled to a depth of 79.5 m of a planned 50 to 100 m depth, at 67 degrees decline/dip and was collared approximately 110 m east-southeast of historical drill hole TEN 17 - 08. The hole was collared to test a surface, advanced argillic altered and surface mineralized dacite and dacitic breccia consisting of silica and patchy vuggy silica together with X-ray diffraction clay analysis showing presence of dickite and pyrophyllite. Please refer to Figure 1 and Figure 2 for drill hole locations. These surface features are coincident with a strong near-surface IP geophysics resistivity feature under recent artisanal excavations where gold had been panned from soil and loose gravel.

The IP geophysics resistivity feature was the target of historical Mammoth drill hole TEN 17 - 08. Hole TEN 17 - 08 returned 14.9 m grading 0.58 g/t gold and 3.1 g/t silver (0.62 g/t gold Eq) however the targeted geophysical feature was never reached as the hole was abandoned prior to reaching the target due to poor ground conditions.

From the surface the hole remained in highly blocky, heavily oxidized variably altered silica and clay-rich breccia and porphyritic dacite rock with frequent poor core recovery until the end of the hole at 79.5 m. The first 43.5 m of the hole coincides with the mineralized zone assaying 0.52 g/t gold, 4.1 g/t silver (0.59 g/t Au Eq), including a 6.0 m interval grading 0.73 g/t gold Eq. The mineralized interval was followed by generally fresh unaltered porphyritic dacite to the bottom of the hole at 79.5 m. This drill hole potentially extended the mineralization encountered in hole TEN 17 - 08 more than 100 m east.

The hole was drilled to a depth of 58.5 m of a targeted 150 to 200 m depth, at 60 degrees decline/dip and was collared approximately 130 m southwest of historical hole TEN 17 - 08. Please refer to Figure 1 and Figure 2 for drill hole locations. The hole was collared to test surface mineralized porphyritic dacite and associated volcanic breccia outcrops and sub-crops of which various samples assayed above 1.0 g/t gold and where advanced argillic alteration, including silica and patchy vuggy silica together with X-ray diffraction clay analysis showed the presence of dickite consistent with a moderate IP geophysics resistivity feature at depth. This resistivity anomaly was the target of TEN17-08 as described above.

The hole intercepted from top to bottom porphyritic dacite. The first 50.8 m of hole TEN 21 - 04 is oxidized and highly weathered with the exception of the first 21.0 m which is variably (weak to moderate) silicified and coincides with the mineralized intercept in this hole returning 19.5 m grading 0.53 g/t gold and 7.3 g/t silver (0.63 g/t gold Eq). This drill hole potentially extended mineralization from 50 to 100 m west. The hole had to be abandoned prior to reaching its targeted depth because of poor ground conditions due to the high degree of alteration and oxidization of the rock.

Richard Simpson, P.Geo., Vice-President Exploration for Mammoth Resources Corp. is Mammoth's Qualified Person, according to National Instrument 43-101 for the Tenoriba property and is responsible for and has reviewed any technical data mentioned in this news release.

Samples referenced in this press release were prepared and analyzed by ALS laboratories (ALS) in their facilities in Mexico and Canada, respectively. Samples generally consisted of a minimum of 2 kilograms of material. Drill core is mostly HQ diameter core with minor lengths of NQ diameter core. Core is sawn in half with a rock saw with one half used for sample analysis purposes. Where samples are taken these are most often 1.5 metres in length, only in poor recovery sections do they exceed this length, with rare exceptions exceeding a maximum of 4.5 metres in length. Samples are collected with sample ticket and deposited into plastic sample bags sealed with nylon zip lock ties, then loaded into grain sacs similarly sealed with a nylon zip lock tie prior to transport by Mammoth personnel to ALS’s facility in Chihuahua, Mexico for sample preparation. Gold and silver analyses are performed in ALS’s facility in Canada via a 30-gram fire assay with an atomic absorption finish. Silver, copper, lead and zinc are analyzed as part of a multi-element ICP package using a 4-acid digestion. Any over limit samples with greater than one percent copper, lead and zinc are re-analyzed using ore grade detection limits. Blank and duplicate samples are inserted randomly at approximately every 15 samples.

Mammoth Resources (TSX-V: MTH) is a precious metal mineral exploration Company focused on acquiring and defining precious metal resources in Mexico and other attractive mining friendly jurisdictions in the Americas. The Company holds a 100% interest (subject to a 2% net smelter royalty purchasable anytime within two years from commencement of commercial production for US$1.5 million) in the 5,333-hectare Tenoriba gold property located in the Sierra Madre Precious Metal Belt in southwestern Chihuahua State, Mexico. Mammoth is seeking other opportunities to option exploration projects in the Americas on properties it deems to host above average potential for economic concentrations of precious metals mineralization.

To find out more about Mammoth Resources and to sign up to receive future press releases, please visit the company's website at: www.mammothresources.ca., or contact Thomas Atkins, President and CEO at: 416 509-4326. 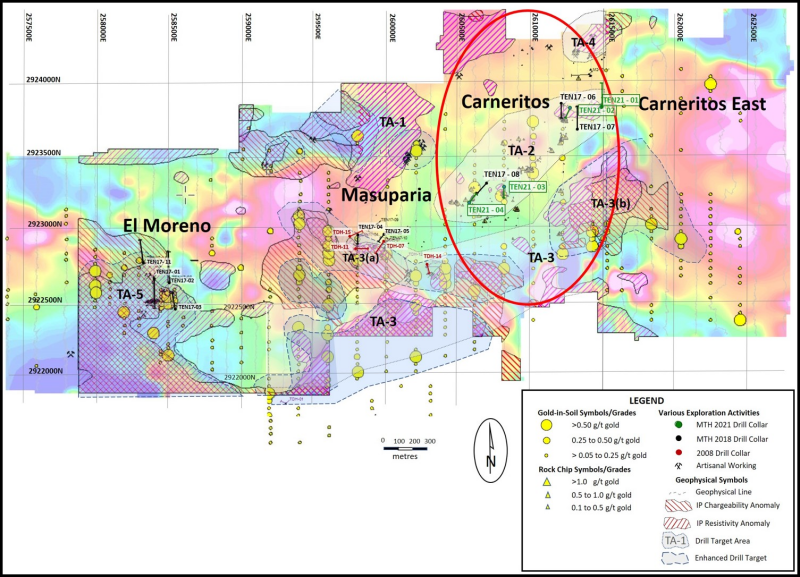 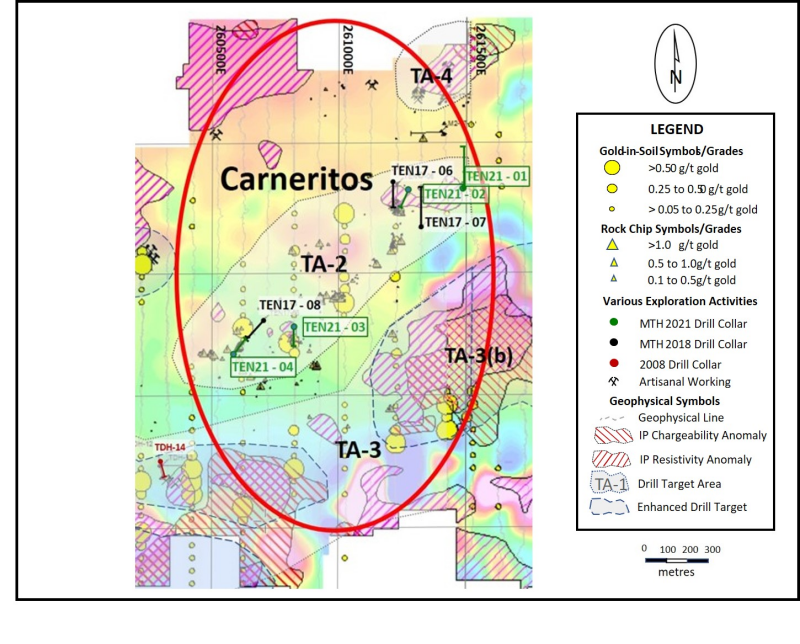