Use of this site indicates acceptance of the Privacy Policy and Terms of Use.
The information on this Website is not reliable and not intended to provide tax, legal, or investment advice. Nothing contained on the Website shall be considered a recommendation, solicitation, or offer to buy or sell a security to any person in any jurisdiction.
CEO.CA members discuss high-risk penny stocks which can lose their entire value. Only risk what you can afford to lose.
© 2022 - CEO.CA Technologies Ltd.
@newswire/sitka-gold-completes-first-hole-of-its-2022-drilling ↻
0 online
Today This week
Search Subscribe
Members of @newswire/sitka-gold-completes-first-hole-of-its-2022-drilling

VANCOUVER, BC, June 21, 2022 /CNW/ - Sitka Gold Corp. ("Sitka'' or the "Company") (CSE: SIG) (FSE: 1RF) (OTCQB: SITKF) is pleased to announce that the next phase of drilling recently began on June 17th at the Company's Alpha Gold Project ("Alpha Gold" or the "Project"), located at the southeast end of the Cortez Trend approximately 40 kilometres southeast of the Barrick/Newmont Cortez gold mine complex in Nevada. O'Keefe Drilling, an experienced and highly regarded drill contractor that is familiar with the Project, has been secured to conduct the drilling. The Company is also pleased to announce that it has completed the first drill hole of this phase of drilling (hole #AG22-09) that went to a depth of 171 metres (see description below). The Company is very excited to be continuing its exploration drilling at Alpha Gold, where drilling completed in 2021 discovered a new Carlin-type gold system. Valuable knowledge gained from the previous drill campaigns, along with additional mapping and other recent information gathered in the area, have been incorporated into the latest generation of priority drill targets for this current phase of exploration.  All previous holes drilled to date have intersected gold mineralization associated with strong Carlin-type pathfinder elements in a zone of strong alteration at surface that extends for approximately 7 kilometres along major fold structures that have been mapped in the area. Sitka intends to drill a minimum of 1,500 metres during this phase of exploration.

AG22-09 was completed on June 19th to a depth of 171 metres. The hole was drilled at an azimuth of 176 degrees and an inclination -60 degrees from the same pad as drill holes AG21-05 and -07 and was positioned to test the hanging wall (west side) of the N-S structure (see Figures 1 and 2). There was a decalcified zone at 58-61 metres, but the strong alteration began at 113 metres in the Horse Canyon equivalent unit.  A zone of strong silicification, decalcification and druzy quartz in vugs continued to 143 metres.  The interval was highly carbonaceous and zones of 5-10+ percent pyrite were common.  There were also balls of clay and chips of rhyolite from thin dikes in the upper part of the interval. This alteration was much more visual than that at the bottom of AG21-05 (see news release dated September 16, 2021).  At 143 meters the hole began to hit cavities and lose return. Cuttings that were recovered below 143 metres included mostly fine sucrosic jasperoid typical of strongly altered Devils Gate Limestone. The strong alteration reminiscent of AG21-08 in this hole (see news release dated November 16, 2021) is very encouraging for AG21-10 which is currently being drilled and will test the same structure farther south and deeper (see Figure 2).

"We are very excited to begin this latest phase of drilling at Alpha Gold," stated Cor Coe, P.Geo., CEO and Director of Sitka. "This is the first drilling to be conducted since we doubled the size of the Alpha Gold Property last year, after receiving our assay results and our amended BLM drill permit (see news releases dated November 16, 2021 and March 3, 2022). Previous drilling at Alpha Gold returned intervals of greater than one gram per tonne of gold with only eight drill holes completed across three phases of drilling in a large, newly identified area within the projection of the Cortez trend. Initial observations of drill hole AG22-09 are very encouraging and further enforce our belief that Alpha Gold has excellent potential to host a large, Carlin-type gold deposit. Sitka is well funded to continue drill advancing the Alpha Gold Project as we work towards vectoring in on the high-grade core of this newly discovered Carlin-type gold system."

Drilling at Alpha NW will continue testing prospective ore control structures near the crest of the large-scale Alpha NNW anticline.  A rhyolite dike-filled normal fault tested by AG21-08 yielded up to 1.24 g/t Au (see press release dated November 16, 2021) in the Horse Canyon Equivalent stratigraphic host, but this intercept is well out on the east limb of the anticline. Follow up drilling will test a larger NNW normal fault nearer the crest of the anticline. The structure underlies thin soil and gravel cover.  Related alteration and target potential became apparent after additional mapping following last year's drilling.  AG21-05 was proximal to the same structure farther north and encountered remarkably strong gold mineralization (0.41 g/t over 12.19 m; see news release dated September 16, 2021) high in the Horse Canyon equivalent unit where the hole was lost.  SSE directed testing through the entire host horizon is now considered critical to better assess this shallow target.

More detailed surface mapping at Frazier Creek has now clearly defined the anticlinal target in that area, five kilometers SSE of Alpha NW.  Alteration intensity on surface, surrounding the intersection of the anticline with the major Frazier Creek cross-structure, make this an extremely exciting target to test in favorable rocks at depth. The Horse Canyon equivalent target stratigraphy are estimated to lie at depths comparable to those seen in AG21-08 at Alpha NW.

Last year's drilling established that Alpha's NNW anticline carries widespread gold mineralization in Horse Canyon equivalent host stratigraphy. This year's objective is to determine and vector specific ore controls within this very large fold structure. Identifying primary ore controls in a Carlin-type system almost always requires more than the cursory wide spaced drilling so far completed at Alpha Gold.  High potential exists for much higher gold grades that will justify aggressive lateral offset drilling and down section testing of even more prospective Wenban 5 equivalent stratigraphy.  The Goldrush discovery was also an incremental process that included significant early gold intercepts at ET Blue in 2004, persistent exploratory drilling, an important breakthrough from a water well through gravel cover and finally the discovery announcement in 2010.  Alpha Gold has all the correct elements to host a major Carlin-type discovery, and the company is excited to commence another phase of drilling. 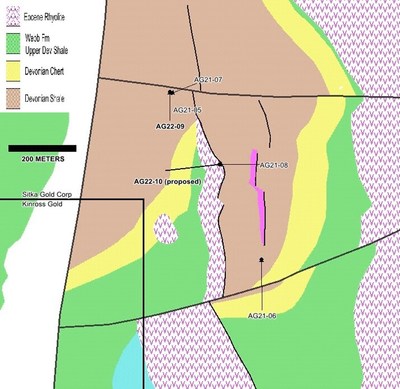 Sitka Gold has acquired a 100% interest in the Alpha Gold Project, located along the southeast projection of the prolific Cortez Gold Trend in Eureka County, approximately 135 kilometres southwest of Elko, Nevada. The Project is comprised of 1 claim block totaling 239 lode claims covering an area of approximately 4,780 acres (1,934 hectares) and is accessible via a dirt road, approximately 2 km west of Nevada State Highway 278.

The Project was initially staked after the location was recognized as the intersection of the regional-scale Pine Valley anticline with northeasterly fold trends exposed in the Roberts Mountains. Overprinting NNW folds coincident with the projection of the Cortez Trend were subsequently recognized and found to be important alteration and mineralization controls. Of primary importance at the Alpha Gold location is that the rocks have been down-dropped significantly by late extensional faulting. Prior to extension, and during the critical 36-42 Ma Carlin-type mineralization event, the fold crest at Alpha Gold would have been a regional highpoint among nearby mountain ranges. Well exposed 'lower plate windows' near Alpha Gold have been extensively explored for Carlin-type gold deposits with a number of deposits found along the limbs.

Three drill programs totaling 2604 meters in 8 holes have been completed at Alpha Gold since its acquisition and have advanced the Property from an undrilled geologic concept with a surface alteration and pathfinder element anomaly, to a large wide-open Carlin-type gold system with thick, low-grade gold intercepts, from wide-spaced drilling.

Sitka Gold will be attending the following events:

Sitka Gold Corp. is a mineral exploration company headquartered in Canada that is fully funded for its planned 2022 exploration programs with the recent completion of a $4.69 million financing. The Company is managed by a team of experienced industry professionals and is focused on exploring for economically viable mineral deposits with its primary emphasis on gold, silver and copper mineral properties of merit. Sitka currently has an option to acquire a 100% interest in the RC, Barney Ridge, Clear Creek and OGI properties in Yukon and the Burro Creek Gold property in Arizona. Sitka owns a 100% interest in its Alpha Gold property in Nevada, it's Mahtin Gold property in the Yukon and it's Coppermine River project in Nunavut.

Sitka is currently conducting a 10,000 metre diamond drill program with two drills at its RC Gold Project in the Yukon where the last hole drilled in 2021 (Hole 21) resulted in the discovery of a new gold zone (the Blackjack zone) and returned 220.1 metres averaging 1.17 g/t gold from surface (see news release dated February 17, 2022).  Follow-up drilling in the winter of 2022 expanded the Blackjack zone to the east, west and vertically down dip.  Current drilling is focused on further defining the extent of this zone, which is open in all directions.

The scientific and technical content of this news release has been reviewed and approved by Cor Coe, P.Geo., Director and CEO of the Company, and a Qualified Person (QP) as defined by National Instrument 43-101.

ON BEHALF OF THE BOARD OF DIRECTORS OF
SITKA GOLD CORP.

Forward-looking statements and information are provided for the purpose of providing information about the current expectations and plans of management of the Company relating to the future. Readers are cautioned that reliance on such statements and information may not be appropriate for other purposes, such as making investment decisions. Since forward‐looking statements and information address future events and conditions, by their very nature they involve inherent risks and uncertainties. Actual results could differ materially from those currently anticipated due to a number of factors and risks. These include, but are not limited to, the expected timing and terms of the private placement, use of proceeds, anticipated work program, required approvals in connection with the work program and the ability to obtain such approvals. Accordingly, readers should not place undue reliance on the forward‐looking statements, timelines and information contained in this news release. Readers are cautioned that the foregoing list of factors is not exhaustive.

Neither the CSE nor its Regulation Services Provider (as that term is defined in the policies of the CSE) accepts responsibility for the adequacy or accuracy of this release. No stock exchange, securities commission or other regulatory authority has approved or disapproved the information contained herein.