Use of this site indicates acceptance of the Privacy Policy and Terms of Use.
The information on this Website is not reliable and not intended to provide tax, legal, or investment advice. Nothing contained on the Website shall be considered a recommendation, solicitation, or offer to buy or sell a security to any person in any jurisdiction.
CEO.CA members discuss high-risk penny stocks which can lose their entire value. Only risk what you can afford to lose.
© 2021 - CEO.CA Technologies Ltd.
@nasdaq/alphamin-provides-mpama-north-and-mpama-south-drilling ↻
0 online
Today This week
Search Subscribe
Members of @nasdaq/alphamin-provides-mpama-north-and-mpama-south-drilling

GRAND BAIE, Mauritius, Nov. 08, 2021 (GLOBE NEWSWIRE) -- Alphamin Resources Corp. (AFM:TSXV, APH:JSE AltX, “Alphamin” or the “Company”), a producer of 4% of the world’s mined tin1 from its high-grade operation in the Democratic Republic of Congo, is pleased to announce drilling progress at its Mpama North mine and Mpama South deposit.

“We are delighted with the recent drilling results and ground-breaking interpretations of these exploration initiatives and look forward to realising our exceptional resource and production expansion potential.”

By the end of October 2021, ~6,167m and 12 drillholes had been completed. Additional drilling has now uncovered the existence of a crosscutting fault causing a downward and westward offset of the deeper mineralisation. By refocussing drilling closer to the final drill line from previous exploration, holes drilled at 75m further along strike succeeded in intercepting significant zones of cassiterite mineralization. For example, new drillhole MND011 appears to be one of the best intercepts drilled to date on the property, based on the quantity of visual cassiterite distributed over 20.6 metres (part of which is shown in Figure 1). In addition, 5 new holes west of the identified fault have also intercepted mineralised visual cassiterite providing strike extension potential on the western block. Drilling will continue to refine our understanding of these mineralised areas with the objective of adding significantly to the current life-of-mine.

Mpama South is a high-grade tin discovery located immediately south of Alphamin’s operating Mpama North mine. Drilling in 2021 has completed ~18,047m and 69 additional drillholes, of which assays from ALS laboratories in South Africa for 57 drillholes have been received to date. The first three phases of drilling will form the basis of a Mineral Resource estimation exercise, the results of which are expected to be announced in January 2022. An updated estimate will be announced later in Q1 2022 from the on-going phase 4 drilling. Selected significant intercepts from the recently received batches of assays from the Mpama South drilling program are listed below as apparent widths:

The success of the Mpama South drilling is such that the zone of high-grade mineralisation has grown substantially since the recommencement of drilling in December 2020. Figure 2 illustrates this evolution based on assays received for drilling to the end of September 2021. The complete list of intercepts to date is shown in Appendix 2. 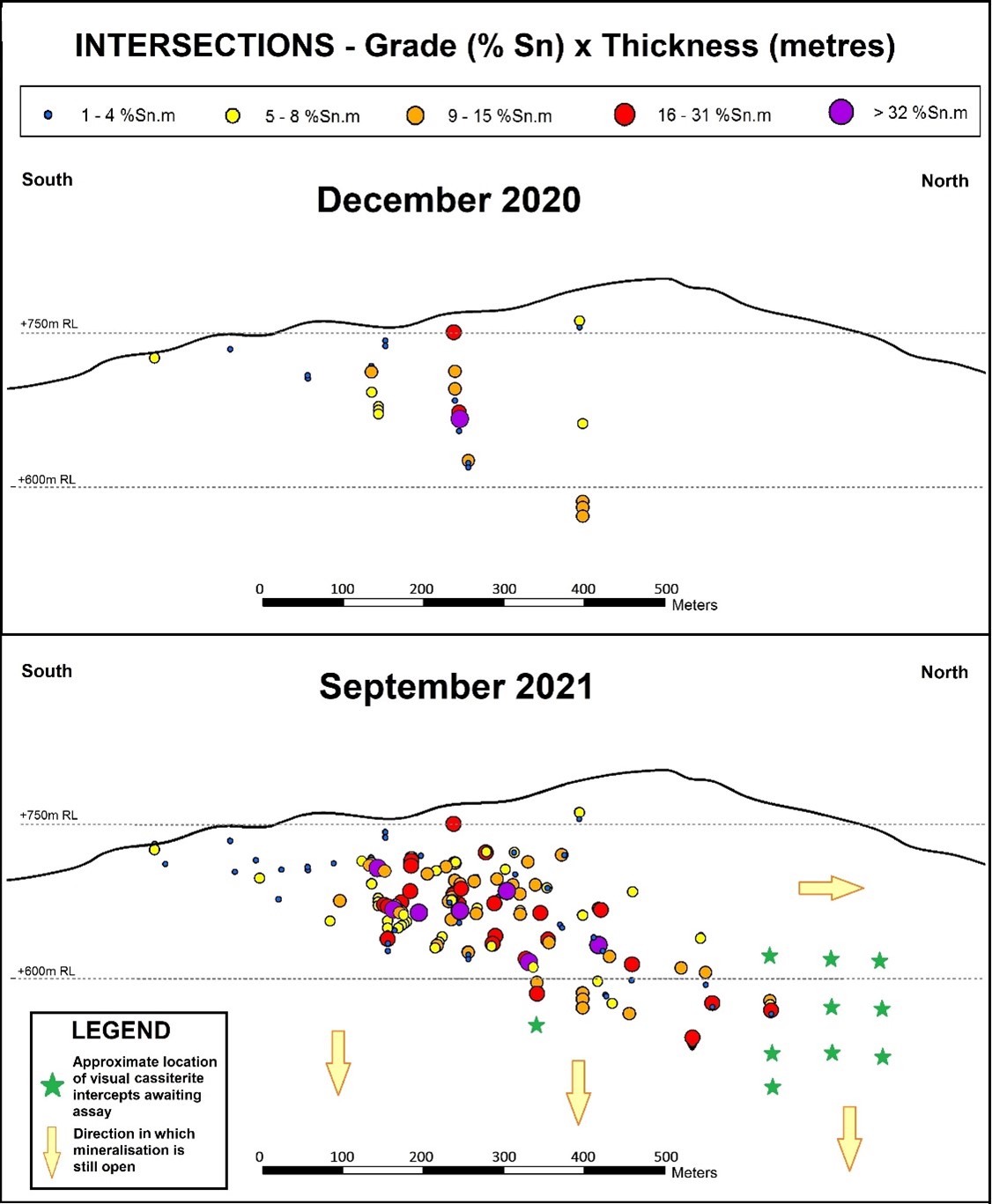 Alphamin has to date reported that Mpama South was located 750m south of its currently operating Mpama North mine. However, as drilling has progressed the extent to which mineralisation has been identified has expanded at Mpama South and a newer interpretation is that Mpama North and Mpama South were a single extensive zone of high grade cassiterite mineralisation which was structurally offset by a late-stage cross cutting fault. Current drilling under phase 4 shows Mpama South mineralisation occurs to within 200m of the southern extents of the declared Mpama North Mineral Resource and on a similar mining level / elevation (See Figure 3). This gap is expected to close further with more drilling. The implication of being able to connect Mpama South to the underground development, infrastructure and services of the Mpama North mine is relevant from a fast-tracked low-cost development potential.

Figure 3: Proximity of Mpama South Mineralisation to the Mpama North Mine 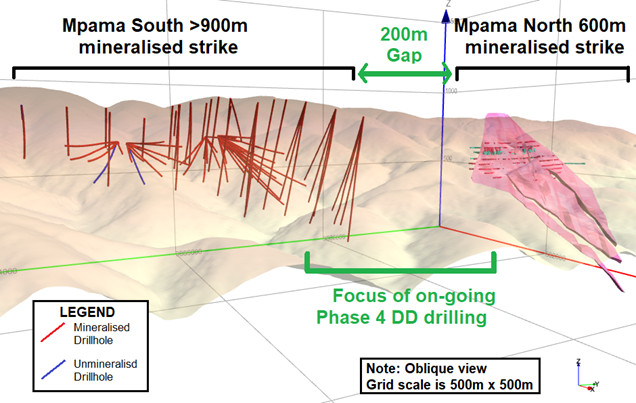 Additional assays have been received on the detailed in-fill soil sampling campaign over the 13km long Bisie Ridge. The results are encouraging to the extent that new targets have been generated for follow up drilling. Drilling of the first major target, Marouge, will commence in late November 2021 (Figure 4). 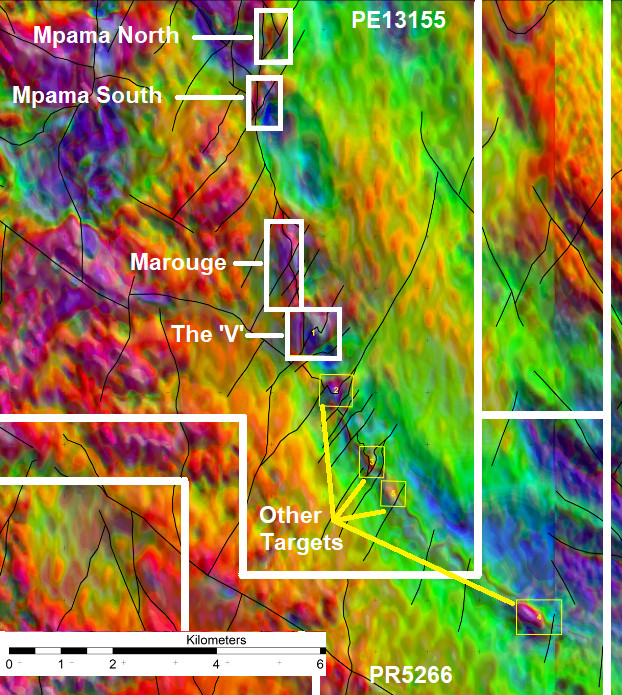 Mr Jeremy Witley, Pr. Sci. Nat., B.Sc. (Hons.) Mining Geology, M.Sc. (Eng.), is a qualified person (QP) as defined in National Instrument 43-101 and has reviewed and approved the scientific and technical information contained in this news release. He is a Principal Mineral Resource Consultant of The MSA Group (Pty.) Ltd., an independent technical consultant to the Company.

After receipt of diamond drillcore from the drillers at the drill rig in marked core trays, core was transported to the Company’s core shed by the site geologist for logging and sampling. After sample mark up, lithological and geotechnical logging and photography, the core was split longitudinally in half using a water-cooled rotating diamond blade core saw. The cut core was replaced into the core tray with the half to be sampled facing upward. Based on previous experience at Bisie with high density variability and at the qualified person’s instruction (Mr J. Witley of MSA Group), specific gravity (SG) was performed exclusively on the half core that was to be sampled. The Archimedes method of weight in air vs weight in water was used on the whole length of the half core that was to be sampled and then replaced in the core trays.

Air dried samples were placed in pre-numbered sample bags together with pre-printed numbered sample tickets, which were cross-checked afterwards to prevent sample swaps. Sample bags were sealed using a plastic cable tie and then placed into poly-weave sacks which were in turn sealed with plastic cable ties. Each poly-weave sack was marked with a number and the sample numbers contained within, ready for delivery to the on-site Alphamin-Bisie laboratory for sample preparation.

At the laboratory, samples were first checked off against the submission list supplied and then weighed and oven dried for 2 hours at 105 degrees Celsius. The dried samples were crushed by jaw crusher to 75% passing 2mm, from which a 250g riffle split was taken. This 250g split was pulverised in ring mills to 90% passing 75μm from which a sample for analysis was taken. Samples were homogenised using a corner-to-corner methodology and two samples were taken from each pulp, one of 10g for on-site laboratory assaying and another 150g sample for export and independent accredited 3rd party laboratory assaying.

For the initial on-site laboratory assay, 10 grams of pulverised sample is mixed with 2 grams of binder before press pellet preparation at 20t/psi for 1 minute. Press pellets are analysed in a desktop Spectro Xepos XRF analyser, twelve at a time, for Sn, Fe, Zn, Cu, Ag, Pb and As along with a standard, duplicate and blank. The analytical method conducted on the pressed pellet has an expected 10% precision and an upper detection limit of 70,000ppm and lower detection limit of 500ppm. Over-limit samples are titrated by wet chemistry with an upper limit validation of 70% Sn. The on-site laboratory assays are merely an exploration tool and were not used for reporting the exploration results, which are based solely on the ALS assays.

The 150g sample is packaged in sealed paper sample envelopes and packed in a box for export in batches of approximately 500 samples and prepared for export authorisation with national authorities. Once authorisation is received, samples are air-couriered to ALS Group in Johannesburg South Africa, a subsidiary of ALS Limited, which is an independent commercial analytical facility. ALS operations are ISO 9001:2015 certificated and the Johannesburg office is ISO 17025 accredited for Chemical Analysis by SANAS (South African National Accreditation System, facility number T087), although the accreditation does not extend to the methods used for tin.

Received samples at ALS Johannesburg are checked off against the list of samples supplied and logged in the system. Quality Control is performed in the way of sieve tests every 50 samples and should a sample fail, the preceding 50 samples are ground in a ring mill pulveriser using a carbon steel ring set to 85 % passing 75μm. Samples are analysed for tin using method code ME-XRF05 conducted on a pressed pellet with 10% precision and an upper limit of 5,000ppm. The over-limit tin samples are analysed as fused disks according to method ME-XRF15c, which makes use of pre-oxidation and decomposition by fusion with 12:22 lithium borate flux containing 20% Sodium Nitrate as an oxidizing agent, with an upper detection limit of 79% Sn.

Method code ME-ICP61 (HF, HNO3, HClO4 and HCl leach with ICP-AES finish) is used for 33 elements including base metals. ME-OG62, a four-acid digestion, is used on ore grade samples for lead, zinc, copper and silver. Both methods are accredited by SANAS.

The program is designed to include a comprehensive analytical quality assurance and control routine comprising the systematic use of Company inserted standards, blanks and field duplicate samples, internal laboratory standards and analysis at an accredited laboratory. The pulps were accompanied by blind QAQC samples inserted into the sample stream by the Alphamin-Bisie geologists. These comprised blank samples, certified reference materials and pulp duplicates each at an insertion rate of approximately 5%.

The QAQC results demonstrate that the assay results are both accurate and precise with an insignificant amount of contamination (in the order of 10pmm Sn on average) and negligible sampling errors. Further verification work is in progress by additional check assays by SGS South Africa (Pty) Ltd.